Data security is the number one concern of the customer. To achieve this quality, we look at security in depth. With an open system, deployed in the cloud we have adopted the notion that:

The results from the data ecosystem should be consistent and explainable.

We need to ensure that the system is perceived as desirable to work with by a large number of casual users. This means that engagement with the system should appear natural and interactive.

The system should automatically scale up to meet demand and scale back to remain cost effective.

We have a large user base located around the world. Onboarding these users requires the ability to effectively deploy new instances and organizations.

We have adopted a process focused on continuous deployment for services that are highly available. This requires that a running system be updatable while running, either to introduce new features and fixes or to roll-back defective updates.

To satisfy our goal of schema and quality on consumption from original data, we need the ability to add and compose new enrichment services.

We need to be able to scale our operational support cost as a function of the number of systems rather than the number of users or amount of data that we serve.

We have adopted the principles of Site Reliability Engineering where reliability is a function of what the user observes rather than how the underlying systems are performing. Thus, we focus our metrics on user journey's and underlying developments of resiliency over robustness.

This is the most visible Reliability goal. If the system is not available, it has no value to the users. We would rather run in a restricted mode than be unavailable.

Emergent design – Provides the technical basis for a fully evolutionary and incremental implementation approach. This helps designers respond to immediate user needs, allowing the design to emerge as the system is built and deployed.

Intentional architecture – This is a set of purposeful, planned architectural initiatives, which enhance solution design, performance, and usability and provide guidance for inter-team design and implementation synchronization."

A key design goal of the data ecosystem is to support new:

A highly flexible system is often a challenge for developers. To offset this, we:

We have a highly distributed organization continuously developing and deploying services to a system intended to be reliability. This means that any coupling among services should be necessary to achieve business goals, and testable to avoid the introduction of breaking changes.

Quality Attributes often compete with each other, The chart below describes tradeoffs against common system qualities. There are two techniques for dealing with these tradeoffs 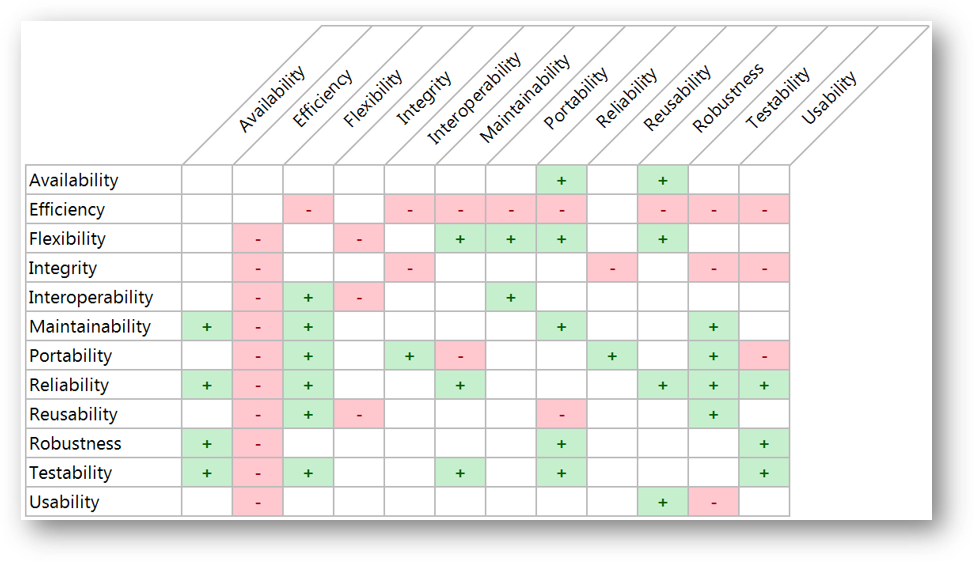