The intent of this non-spike is to:

We will be prototyping an Apache Airflow-based implementation in 2020Q1 to:

The subsequent phases are to:

Detailed user stories are being developed in parallel. There's a risk that the prototype implementation will be affected by these user stories. We are minimizing the risk by incorporating the user story draft feedback, which we expect to be ready by the end of 2019.

AWS has suggested implementing a registry service to enable operators to register more atomic portions of business logic (e.g., post-load processing such as enhancement) independently from the main workflow, rather than implement them as sub-DAGs.

AWS has agreed that the Registry concept is out of scope for MVP1 and the decision to implement this way of extending the workflow will be made after the other orchestration services are delivered; introduction of a new registry service or reusing the existing workflow service won’t change the overall architecture and will require minimal changes to the MVP1 code.

The chosen orchestration technology needs to:

The Ingestion flow is acting as a scheduler/orchestrator where actual data movement and compute are a function of the tasks/services that it is orchestrating, so scaling is a function of the number of tasks it can run, rather than size of the data each task is processing.

Given the listed functional and operational requirements, it's suggested to use Apache Airflow as the main workflow engine. Airflow has other benefits:

In Airflow, a DAG – or a Directed Acyclic Graph – is a collection of all the tasks you want to run, organized in a way that reflects their relationships and dependencies.

A DAG is defined in a Python script, which represents the DAG's structure (tasks and their dependencies) as code.

For example, a simple DAG could consist of three tasks: A, B, and C. It could say that A has to run successfully before B can run, but C can run anytime. It could say that task A times out after 5 minutes, and B can be restarted up to 5 times in case it fails. It might also say that the workflow will run every night at 10pm, but shouldn’t start until a certain date."

You can start sub-processes from within a Workflow: DAGs can be nested. The statuses of these sub-processes can also be bubbled up.

This is currently an ENUM. The vision is to expand the data types in future in a pluggable manner.

There need to be additional context attributes at the point of ingestion to classify the data properly upon storage.

You can use Airflow trigger rules to stop processing of subsequent tasks within a job when prior tasks fail.

All services have to receive JWT and PartitionID. For the time being, the security model isn't fully defined, and it's not clear what token will be used for service-to-service communication. Most likely, the calling service will have to perform the token exchange and perform calls on behalf of the user. For the OSDU R2 prototype phase, we're assuming that we have "long-enough" living tokens and just passing them through.

Some endpoints that services implement can only be used by other OSDU services. These endpoints are marked as "internal".

The OpenAPI specifications for the implemented services are available here.

The /getLocation API endpoint creates a new location, such as a GCS bucket, in a landing zone for a new file which will be uploaded by calling party.

The /getLocation workflow is the following. 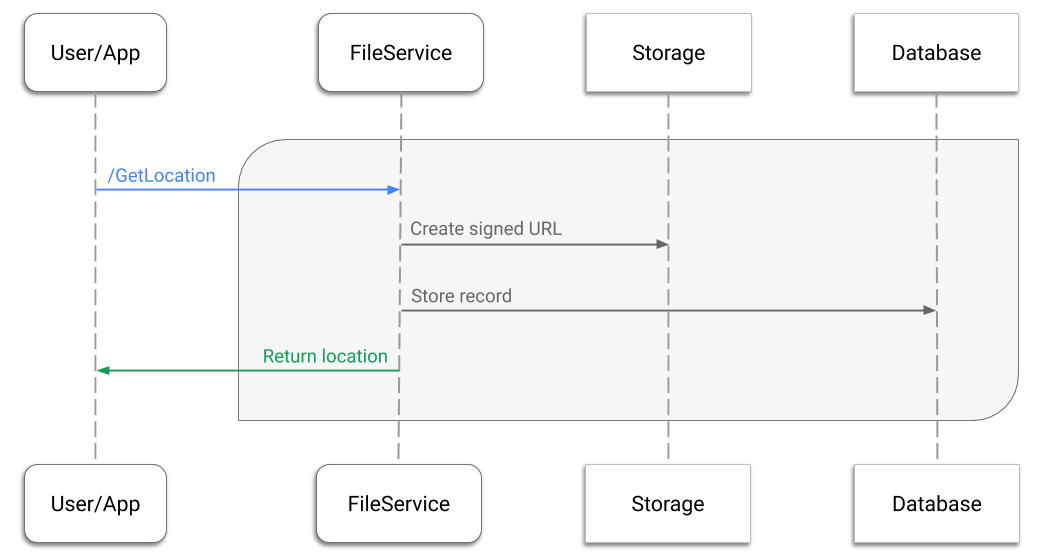 Upon a request, the system should store the following data in the database:

The /getLocation endpoint is expected to create landing zones using the specific functionalities of a cloud platform in which it's operates. Since the exact mechanism of obtaining a URL to store a file and ways of working with the link are dependent on the cloud provider, there's a Service Provider Interface (SPI) implementation required for this endpoint.

The /getFileList API endpoint will be used for auditing. The system relies on the client to upload a file for ingestion, and it's necessary to have the functionality to identify whether the upload happened and clean up the database, if necessary.

The response should be a paginated result from the File service's database.

The getFileList endpoint is expected to use the database with the stored records. Since the exact connection to the database is dependent on the cloud provider, there's an SPI implementation required for this endpoint.

The /getFileLocation endpoint returns internal information about a particular file, including its Driver. Depending on the final security model, the service shouldn't return files that belong to other users. 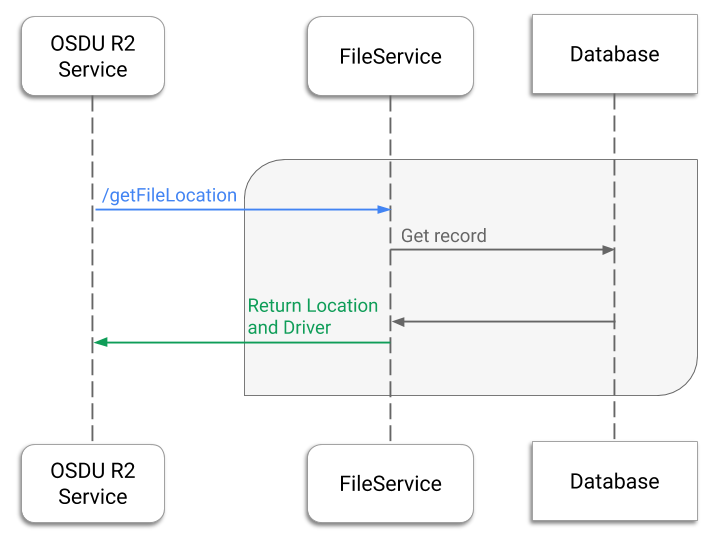 The /getFileLocation endpoint is expected to use the database with stored records. Since the exact connection to the database is dependent on the cloud provider, there's a service interface implementation required for this endpoint.

The /submit endpoint starts a new ingestion flow and performs necessary operations depending on the file type. 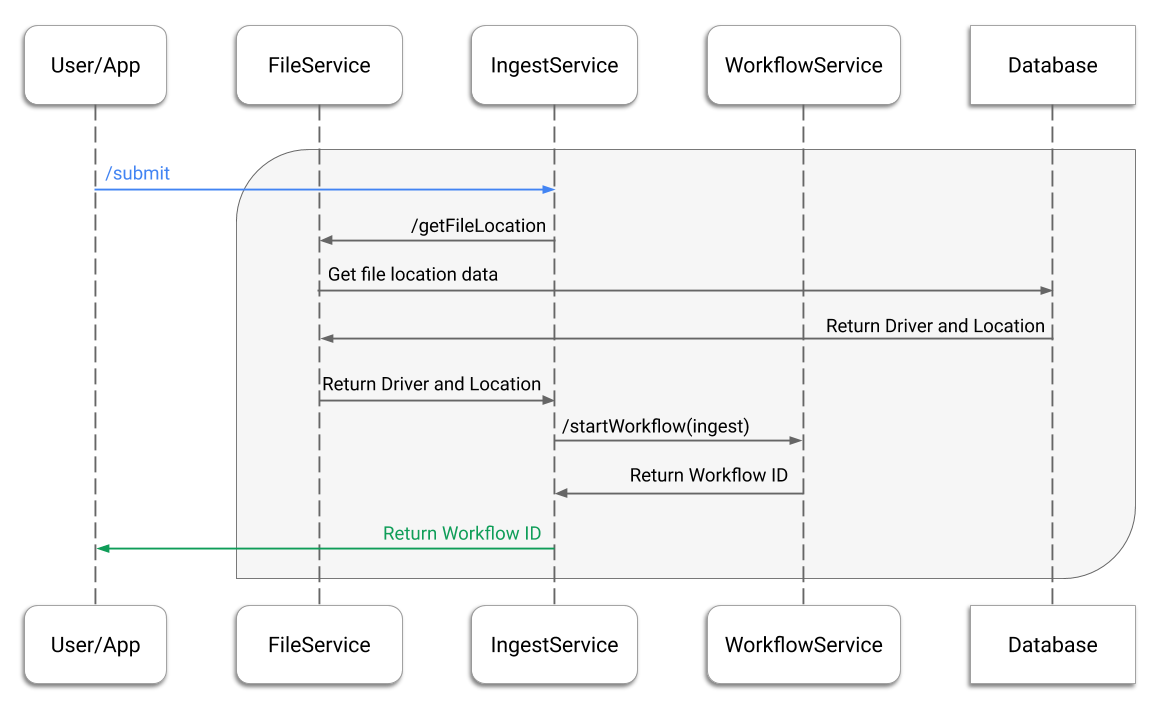 The /submit endpoint is a thin wrapper around the execution of an "ingest" workflow. Upon receiving a call, the system will call the File service to get file details required for the workflow and then call Workflow Service to start the actual workflow.

The /submitWithManifest endpoint starts a new ingestion flow after receiving the load manifest. This API endpoint is responsible for parsing and validating the manifest. 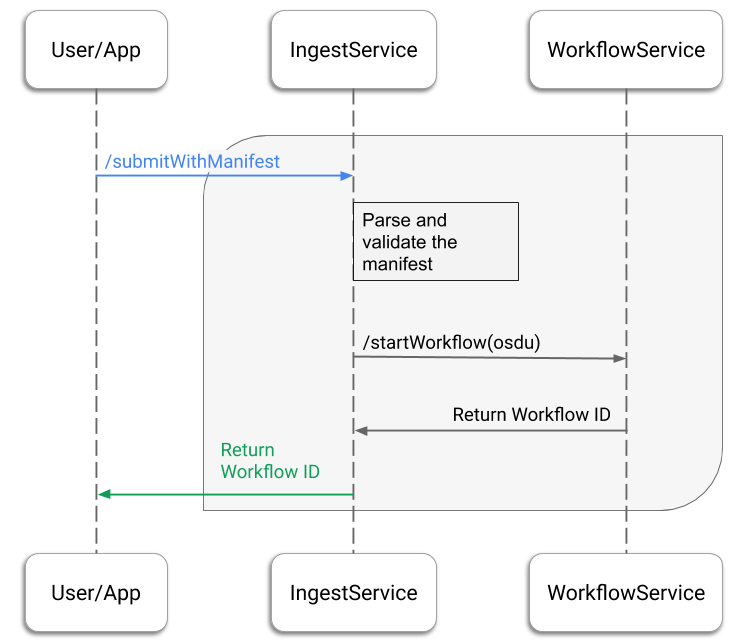 The /submitWithManifest endpoint is using a connection to database to look for schemas since there is no schema version right now. Since the exact connection to the database is dependent on the cloud provider, there's a service interface implementation required for this endpoint.

The /startWorkflow endpoint is a wrapper around an Airflow invocation and it might re-configure the default flows. For each known combination of the user type, data type, and workflow type, the Workflow service should identify a correct DAG and call Airflow.

For the prototype phase, the system won't have interfaces for re-configuring flows. The necessary data is stored in the service's database. 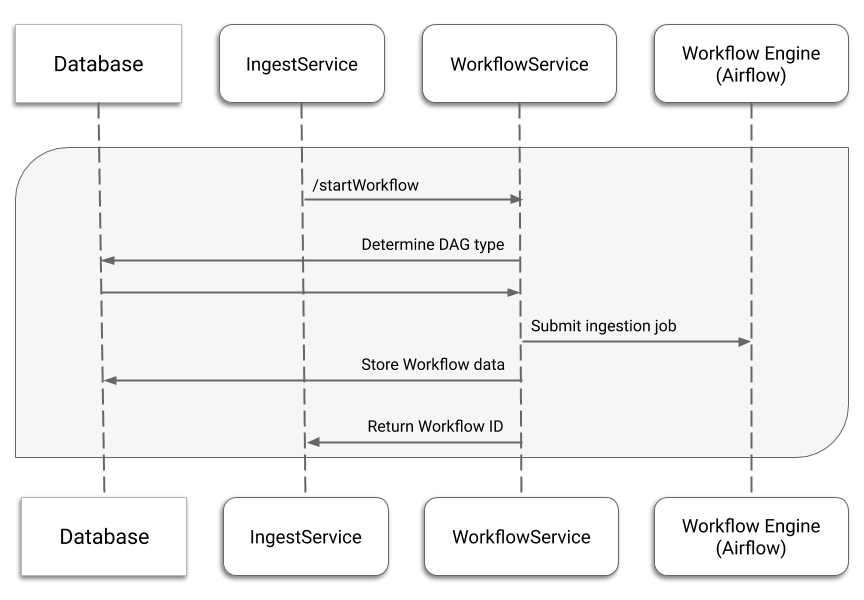 The database contains the following information:

The Workflow service will store the following information about every request:

Upon a request, the Workflow service needs to determines the most granular DAG that's configured for the particular user, and then invoke Airflow.

For example, the system might have the following configuration.

Therefore, possible scenarios are as follows:

The /startWorkflow endpoint is expected to use the database for the registry of the stored DAGs. Since the exact connection to the database is dependent on the cloud provider, there's a service interface implementation required for this endpoint.

The /getStatus endpoint returns the current status of a workflow instance. Depending on the final security model, the user should be able to query only the worfklows they started.

The /getStatus endpoint is expected to use the database with workflow job data to get their statuses. Since the exact connection to the database is dependent on the cloud provider, there's a service interface implementation required for this endpoint.

In the current implementation of the Storage service, it's not possible to store extra non-indexing metadata with the record. The OSDU workflow requires the metadata to correctly link all the objects, which is why it's proposed to add an extra parameter to the request. The parameter will store a list of key-value strings.

The /listRecords should search for the known records by metadata.

Notifications Service (to be developed)

The Notifications service is not part of the OSDU R2 prototype phase and will be designed later. The main purpose of this service is to allow external systems to subscribe for a certain event and being notified when something is happened within the system. However, this is not a process orchestration, but a choreography. Any subscriber won’t be able to change default flow. The only possible option to change logic is to register a new DAG.

This custom operator should be able to update the workflow job status when a DAG has started and/or finished. The operator will be a required step in each DAG.

Upon creating a new record with the workflow job data, the Workflow Service sets the workflow status to "submitted". The operator will update the status to "running", "finished", or "failed".

To avoid constant pulling of the Airflow APIs, it's better to use another custom DAG which will be scheduler to run every N minutes and verify that every workflow which is not in "finished" state is still running and if it failed for some reason, mark it as "failed" in the database.

This activity is not a part of the prototype phase but rather a logical continuation for the workflow-based system. Right now, Storage Service performs a direct call to the Index service. Instead, a new type of workflow should be registered at the system and wrap both those calls. This will allow us to configure multiple indexes, external indexing, etc. This scenario is very useful for such things as machine learning and especially for making data ingested directly through ODES APIs available for the OSDU. 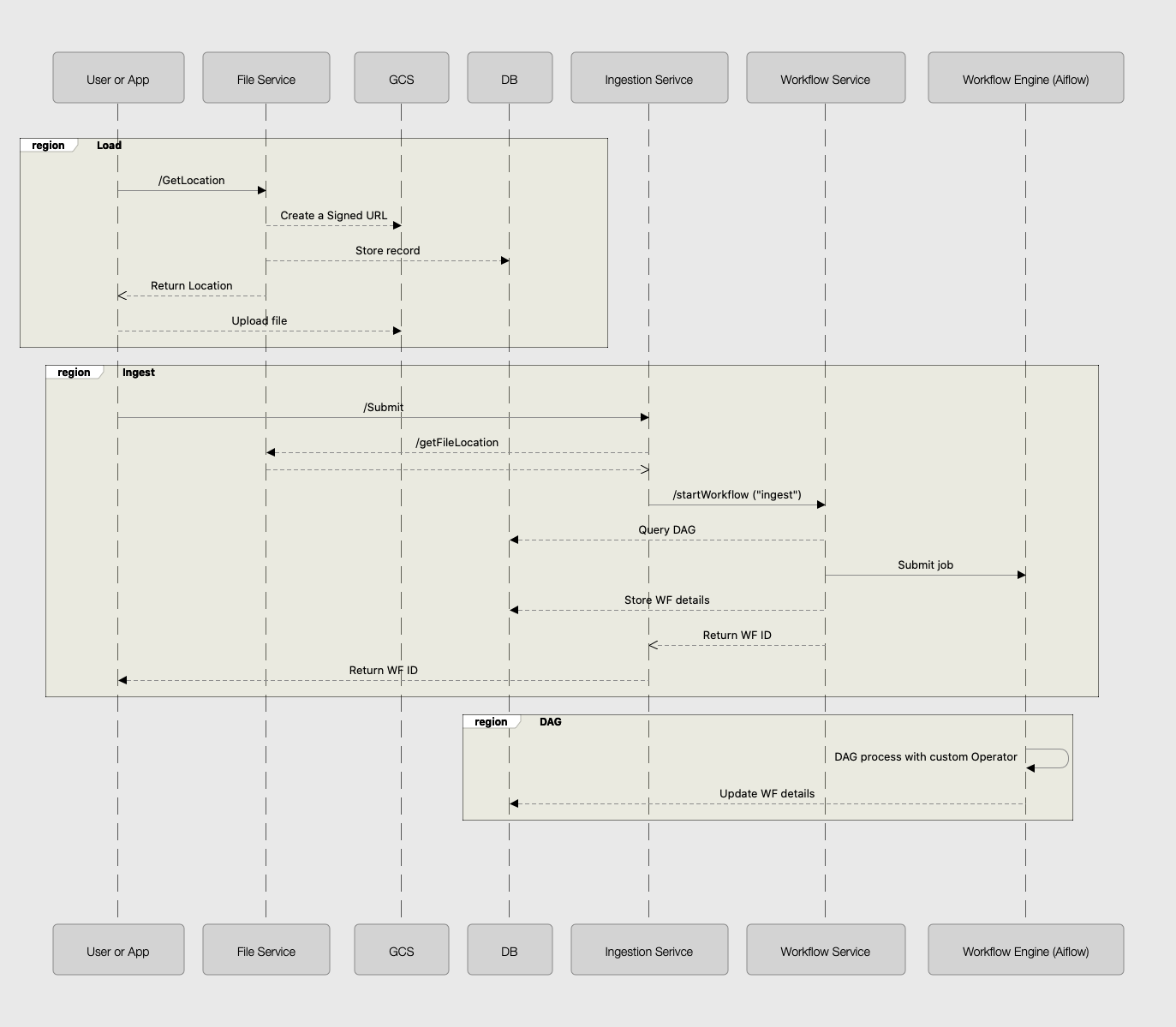 This could more properly referred to as the unitary DAG: it's intent is to ingest a single asset without a manifest. 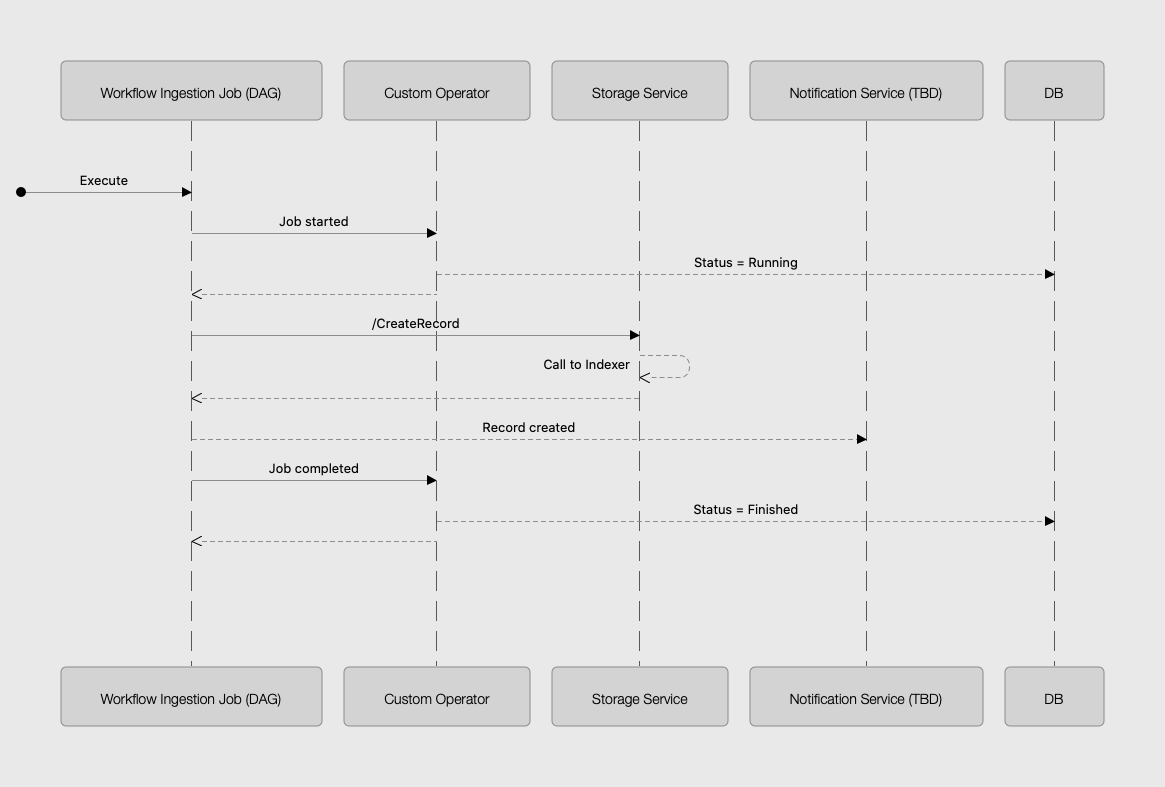 If the LAS parser is ready, we can implement a customized Ingestion DAG with an extra call to the parser.

This could more properly referred to as the manifest DAG: it's intent is to ingest a number of work product components specified in a manifest.

It supports ingestion of generic work product components, which are files in R2, but will include other data types in future. 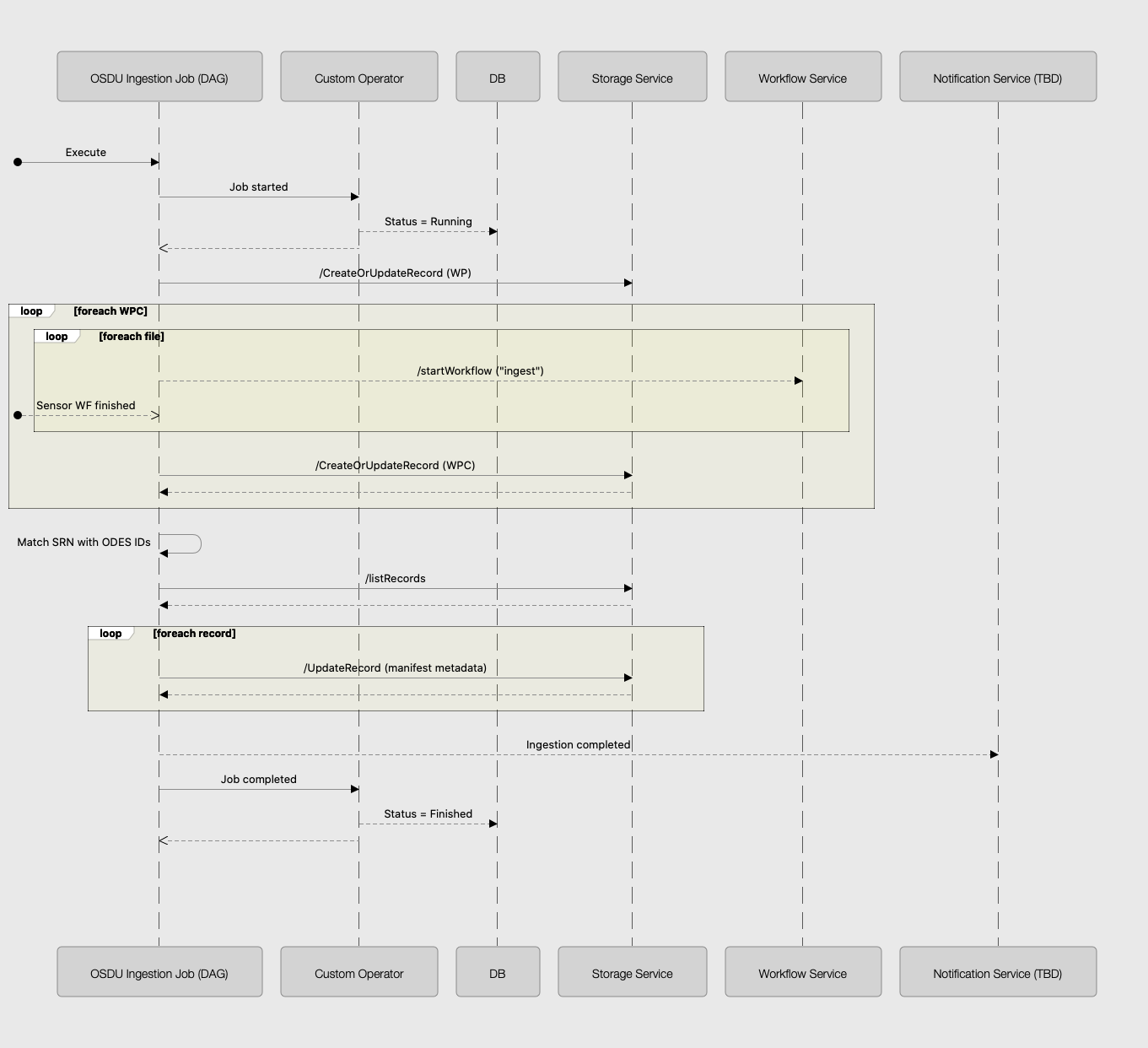 The OSDU Ingestion design is that the manifest data will not be loaded if the file creation fails, to prevent orphan metadata. This is why the sequence is:

LAS parsing will invoke a separate DAG with the logic required for processing parts of a LAS file by specifying the “well_log” DataType (which maps to a DAG) when you invoke the Workflow service.